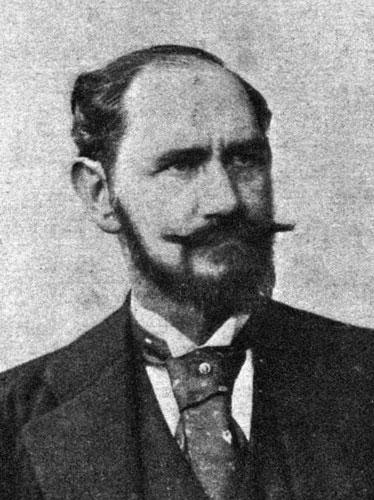 Ferdinand Ritter von Mannlicher (January 30, 1848 – January 20, 1904) was an Austrian engineer and small arms designer. Along with James Paris Lee, Mannlicher was particularly noted for inventing the en-bloc clip charger-loading magazine system. Later, while making improvements to other inventor’s prototype designs for rotary-feed magazines, Mannlicher, together with his protégé Otto Schönauer, patented a perfected rotary magazine design, the Mannlicher-Schönauer, which was a commercial and military success.

Life
A scion of a long-established bourgeois family descending from Most (German: Brüx) in Bohemia, Mannlicher was born in the German city of Mainz, where his father served as a k.k. official in the Austrian garrison at the Confederation Fortress. He returned to the Josefstadt district of Vienna with his parents in 1857, and after receiving his Matura high-school exam attended the Vienna University of Technology. He started his professional career in 1869 as an employee of the Austrian Southern Railway company and worked as an engineer at the Emperor Ferdinand Northern Railway Company until 1887.

Mannlicher had early turned his interest to weapons technology, particularly breech-loading repeating rifles. His ambitions were fueled by the Austrian defeat in the 1866 Battle of Königgrätz, which he traced back to the inadequate equipment of the Imperial and Royal Army. In 1876 he travelled to the Centennial Exposition in Philadelphia to study numerous construction designs and afterwards drafted several types of repeating rifles with tubular magazines. In 1885/86 he patented the “Mannlicher System” of a breechblock on a bolt action basis, which was adopted as a service rifle by the Austro-Hungarian Army and several other armed forces.

Mannlicher joined the Austrian Arms Factory company at Steyr in Upper Austria, which under the name of Steyr Mannlicher soon became one of the largest weapon manufacturer in Europe. The model Mannlicher M1895 was widely used by the Austro-Hungarian Army up to World War I. In 1887 Mannlicher was awarded the 3rd class of the Order of the Iron Crown (Austria), he also received the Prussian Order of the Crown and the officier medal of the French Legion of Honour. On 14 December 1892 Emperor Franz Joseph of Austria vested him with the title of Ritter von (loosely translated to: ‘knight of’) due to his earlier ennoblement. In 1899 he was given a lifelong appointment to the Austrian Upper House (Österreichisches Herrenhaus) of the Imperial Council parliament.

Mannlicher’s successful designs during his lifetime were his bolt-action rifles, both military and sporting, in both turn bolt and straight-pull actions. Mannlicher also developed several innovative semi-automatic handgun designs in the last decade of the 19th century. A measure of how far ahead of his time he was can be seen by looking at his experimental designs of semiautomatic rifles, developed at a time when ammunition was not suitable to function properly in such a weapon[citation needed]. Mannlicher began development in 1883 of an automatic rifle firing the 11mm Austrian Werndl, a black powder cartridge.[1] According to WHB Smith in “Mauser, Walther and Mannlicher Firearms” the Mannlicher 1885 became the inspiration for the M1 Garand and the Mannlicher 1900 with the ‘short-stroke piston’ became the inspiration for the M1 Carbine.

Mannlicher’s Model 85 semi automatic rifle used his recoil operated action originally developed in 1883; it anticipated the recoiling barrel system used later in designs like the German MG 34 and MG 42 machineguns, and the M1941 Johnson machine gun. The Model 85 would have fit the same tactical role as the American BAR or British Bren of World War II fame.

The Model 91 semi-automatic rifle was designed to use the 7.92x57mm Mauser cartridge and the Model 88 rifle clip. Like the Model 85 it was a recoil operated action like the later Remington Model 8 and M1941 Johnson rifle.

Mannlicher designed two semi-automatic rifles both called Model 93, one based on his turn-bolt rifle and the other based on his straight-pull rifle. The rifles had a recoil spring housing behind the bolt and the bolt locking lugs were angled, so the bolt started turning on firing, essentially a hesitation lock or delayed blowback much like the later Thompson Autorifle utilising the Blish lock. In this system there was no recoiling barrel nor gas piston as with other rifle-caliber autoloading designs, so the mechanism was simple, but ejection of fired cartridge casings was so fierce as to be hazardous to bystanders.

The Model 95 semi-automatic rifle was gas operated using a slide with the cocking handle on its side and gas piston at its front to operate the bolt, with the recoil spring operating on the slide. Loading was with the Mannlicher packet clip of cartridges inserted into the magazine from the top. These features were also used in the later U.S. M1 Garand rifle.

The Model 1900 semi-automatic rifle was also gas operated but used a short stroke piston with a camming lug that engaged the bolt to open it. The bolt was then carried to the rear by momentum with the recoil spring operating on the bolt. The US M1 carbine used a short stroke piston to impart momentum to a slide that opened the bolt, combining features introduced in the Mannlicher Model 95 and Model 100.[2]

The Model 1905 used a short recoil action with a tilting locking block. This was same principle Mannlicher used in his 1901 pistol-caliber carbine. However, for the rifle he scaled it up to 8mm Mauser, the standard German military rifle cartridge. The rifle also used a Schönauer rotary magazine, and sights copied from the Mauser Gewehr 98.[3] Although his company patented the design in 1905, Mannlicher’s death in 1904 ended any further development of the design.