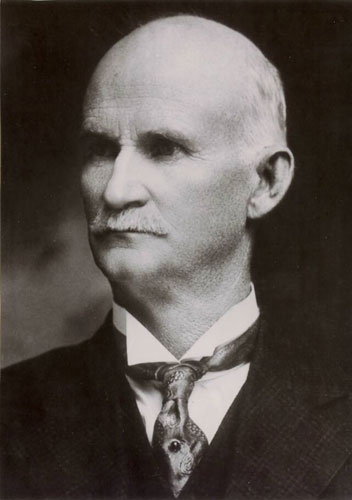 John Moses Browning (January 23, 1855 – November 26, 1926), born in Ogden, Utah, was an American firearms designer who developed many varieties of military and civilian firearms, cartridges, and gun mechanisms, many of which are still in use around the world. He is regarded as one of the most successful firearms designers of the 20th century, in the development of modern automatic and semi-automatic firearms, and is credited with 128 gun patents. He made his first firearm at age 13 in his father’s gun shop, and was awarded his first patent on October 7, 1879 at the age of 2.

Browning influenced nearly all categories of firearms design. He invented or made significant improvements to single-shot, lever-action, and slide-action, rifles and shotguns. His most significant contributions were arguably in the area of auto-loading firearms. He developed the first auto-loading pistols that were both reliable and compact by inventing the telescoping bolt, integrating the bolt and barrel shroud into what is known as the pistol slide. Browning’s telescoping bolt design is now found on nearly every modern semi-automatic pistol, as well as several modern fully automatic weapons. He also developed the first gas-operated machine gun, the Colt-Browning Model 1895—a system that surpassed mechanical recoil operation to become the standard for most high-power self-loading firearm designs worldwide. Browning also made significant contributions to automatic cannon development.

John Moses Browning worked in his father’s Ogden shop from the age of seven, where he was taught basic engineering and manufacturing principles, and encouraged to experiment with new concepts. He developed his first rifle, a single-shot falling block action design, then founded his own manufacturing operation, in partnership with his younger brother Matthew Sandifer Browning, and began to produce this firearm.

John M. Browning and Winchester Repeating Arms Company
Production examples of the Model 1885 Single Shot Rifle caught the attention of the Winchester Repeating Arms Company, who dispatched a representative to evaluate the competition. Winchester bought the design for $8,000 and moved production to their Connecticut factory. From 1883, Browning worked in partnership with Winchester and designed a series of rifles and shotguns, most notably the lever action Winchester Model 1887 and the Model 1897 pump shotgun, the falling block single shot Model 1885, and the lever-action Model 1886, Model 1892, Model 189, Model 1895 rifles as well as the long recoil operated semi-automatic Remington Model 8 rifle, many of which are still in production today in some form; over seven million Model 189s have been produced, more than any other center fire sporting rifle.

Winchester manufactured several popular small arms designed by John M. Browning. For decades in the late 19th Century-early 20th Century, Browning designs and Winchester firearms were synonymous and the collaboration was highly successful. This came to an end when Browning proposed a new long recoil operated semi-automatic shotgun design, a prototype finished in 1898, to Winchester management, which ultimately became the Browning Auto-5 shotgun. As was the custom of the time, Browning’s earlier designs had been licensed exclusively to Winchester (and other manufacturers) for a single fee payment. With this new product, Browning introduced in his negotiations a continuous royalty fee based upon unit sales, rather than a single front-end fee payment. If the new shotgun became highly successful, Browning stood to make substantially more fee income over the prior license fee arrangements. Winchester management was displeased with the bold change in their relationship, and rejected Browning’s offer. Remington Arms was also approached, however the president of Remington died of a heart attack as Browning waited to offer them the gun. This forced Browning to look overseas to produce the shotgun.

Having recently successfully negotiated firearm licenses with Fabrique Nationale de Herstal of Belgium (FN), Browning took the new shotgun design to FN; the offer was accepted and FN manufactured the new shotgun, honoring its inventor, as the Browning Auto-5. The Browning Auto-5 was continuously manufactured as a highly popular shotgun throughout the 20th century. In response, Winchester shifted reliance on John Browning designs when it adopted a hammerless shotgun design of Thomas Crossley Johnson for the new Winchester Model 1911 SL, (Johnson had to work around Browning’s patents of what became the Auto-5) and the new Model 1912 pump shotgun, which was based in small part upon design features of the earlier Browning-designed Winchester Model 1897 shotgun. This shift marked the end of an era of Winchester-Browning collaboration.

Browning in his later years
John Browning was known as a dedicated and tireless innovator and experimenter who sought breakthrough consumer-oriented features and performance and reliability improvements in small arms designs. He did not retire from his career in his elder years, but dedicated his entire adult life – literally to his last day – to these pursuits. On November 26, 1926, while working at the bench on a self-loading pistol design for Fabrique Nationale de Herstal (FN) in Liège, he died of heart failure in the design shop of his son Val A. Browning. Even the 9 mm self-loading pistol he was working on when he died had great design merit and was eventually completed in 1935, by Belgian designer Dieudonne Saive. Released as the Fabrique Nationale GP35, it was more popularly known as the successful Browning Hi-Power pistol, a favorite of sportsmen and law enforcement.

The premium priced Browning Superposed shotgun, an over-under shotgun design for the ages, was his last completed firearm design and possibly his most elegant. It was marketed originally with twin triggers; a single trigger modification was later completed by his son, Val Browning. Commercially introduced in 1931 by FN, Browning Superposed shotguns, and their more affordable cousins, the Browning Citori made in Asia, continue to be manufactured into the 21st Century, and come with varying grades of fine hand engraving and premium quality wood.

Throughout his life, Browning designed a vast array of military and civilian small arms for his own company, as well as for Winchester, Colt, Remington, Savage, and Fabrique Nationale de Herstal of Belgium. Browning firearms have been made, both licensed and unlicensed, by hundreds of factories around the world. Browning Arms Company was established in 1927, the year after Browning’s death. In 1977, FN Herstal acquired the company.